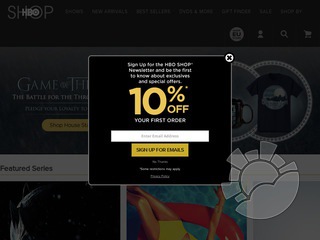 HBO has been a leader in entertainment for decades. The channel is responsible for some of the best original TV shows and movies out there. HBO is the oldest and longest continuously operating pay television service in the United States. So they know all about great content. It has been in operation since November 8, 1972. The network delivers seven 24-hour multiplex channels, including HBO Comedy, HBO Latino, HBO Signature, and HBO Family. It launched the streaming service HBO Now in April of 2015 and has over 2 million subscribers in the United States. If you want merchandise from their properties you only need one stop. Store.HBO.com has everything you need. Everything from mugs to T-shirts and much more. Game of Thrones, The Sopranos, Girls, Big Love, Band of Brothers and much more.