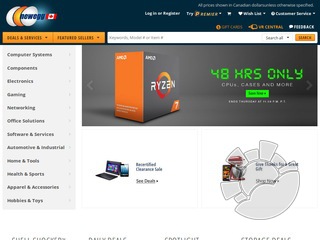 Newegg.ca is the Canadian Newegg store. (If you go to Newegg.com and choose Canada from the flag dropdown, you will be redirected here.) Just like the US version of the site, it is an amazing way to shop for an immense range of computer components, as well as software, electronics, video games, toys, tools, appliances, fitness equipment, apparel, jewelry, watches, sporting goods, and so much more.

When it comes to savings, Newegg Canada has many options. Each day, you need to check out the Shell Shocker deals, which can be fantastic, but can also sell out fast. There are also a large number of heavily discounted "Daily Deals" as well as "EGGXTRA Hot Deals." They are also known for providing free shipping with many products, and frequently offering amazing deals with rebates, such as items that are free after mail-in rebate with free shipping.