Microsoft Store promo codes listed on this page are for discount on software, hardware, and more from MicrosoftStore.com. Shop for discount desktop PCs, laptop computers, ultraportable tablets, and Surface (Surface Books, Surface Studio, and Surface Pro). Other hardware includes Windows phones and Xbox One gaming consoles and accessories. Software and apps include Windows and Office programs for PCs and phones. Buy video games (either on disc or as downloads) for computers, phones, and Xbox. You can also buy movies, tv shows, and music. Activate the savings or see the deal by clicking on our link. When we include a Microsoft Store promo code with the deal, enter it in the shopping cart to activate. 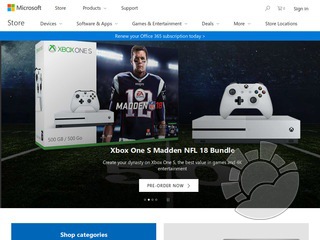 Microsoft Store is a chain of retail stores and an online shopping site, owned and operated by Microsoft, where you can buy computers, computer software and consumer electronics. The stores goal is to "improve the PC and Microsoft retail purchase experience for consumers worldwide and help consumers make more informed decisions about their PC and software purchases." They are the goto place for buying any microsoft product.

The first two Microsoft Stores opened within a week of the Windows 7 launch, in Scottsdale, Arizona and Mission Viejo, California and have been going strong ever since.

The store offers Windows, Microsoft Office, mobile devices running the Windows Phone OS, Xbox 360 and Xbox One game consoles, games and services including on-site Xbox diagnostics. You can also find the answers that you are looking for with the Answers Desk,which will help to answer questions related to Windows, Office, and other Microsoft products. The stores also offer class sessions as well as individual appointments. Consider it a one-stop shop for all of your PC needs.

Microsoft was formed in the mid-70’s and became an industry leader in computers by the mid-80’s. Forty plus years later it is much more than just a computer company. The online Microsoft Store has all the same electronics that you’ll find at your local big box store, but at discount prices and with free shipping. You can find great deals on all the latest 4k HDTV’s from Samsung, Vizio, LG and Sony, video games for your Xbox 360 and Xbox One, PC games, Beats headphones, Bluetooth speakers, home theater systems, and tons of laptops, computers and computer accessories.

Stop thinking of Microsoft as just a world leader in PC’s and start taking advantage of all the great sale prices they offer online. Shop directly at the Microsoft Store online for Windows, Office, Business, Home, Developer and Entertainment programs and computer hardware. Plus unlike most online shopping sites, the Microsoft Store has free shipping with no minimum purchase. That means when you see a great Xbox game for only $5, you still get free shipping.

Buy entertainment products like Xbox One gaming consoles and arcade bundles, along with Xbox One games at great discounted prices. They also sell Zune mp3 players and accessories like premium headphones, docks, car packs, etc. You can also order Operating System upgrades or full versions including Home and Pro versions of Windows.

Ready for some virtual reality fun? The Microsoft Store online has you covered. They sell all the latest virtual and mixed reality headsets, accessories and gaming hardware. Go from every day boring to fantasy world fun in no time. Anything is possible when you’re enjoying virtual reality games.

Are you a college student struggling to get a degree and avoid massive amounts of debt? Microsoft offers special deals just for students like you. Students and educators save 10% or more on select products at the Microsoft Store online.

Need some new software for your current PC? Microsoft offers great deals on top-selling software like Office Software Suites (Standard, Professional, Small Business or Ultimate) or individual office productivity programs like Outlook, Word, or Excel. They even sell the Mac versions of Office for those with an Apple Macintosh computer instead of a PC. Pricing plans starting as low as $6.99 a month.

Start rethinking the way you shop and check out the Microsoft Store online before you make your next electronics or PC purchase. You’ll save big and enjoy great costumer service with free shipping.