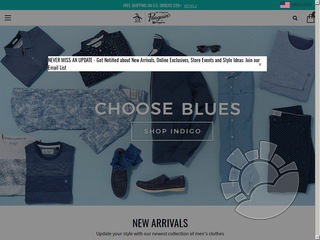 We currently have 2 Original Penguin coupons / deals including 2 promo codes.

In 1955, a salesman named Abbot Pederson traveled to NYC on a sales trip for the Munsingwear brand. He found himself outside a taxidermist’s shop and bought a penguin that he named Pete. During his flight home, he accidentally knocked the head off of the Penguin. A stewardess removed his necktie and wrapped it around the penguin’s neck. She joked that such a dapper bird deserved to be immortalized, maybe even on a shirt. And the idea was born. Today OriginalPenguin.com sells clothing, accessories, shoes kids items and more. To think that it all started with a penguin. They sell quality goods at great prices. It's not all about the penguin, but the spirit of the penguin is alive and well.